As I write this column, we are learning of the death, and amazing life, of Supreme Court Justice Ruth Bader Ginsburg, or RBG, if I may be so bold. So, I am in deep reflection, thinking about this influential woman and what her contributions mean, re-reading books I own about her, and scouring current articles. I am also at this time participating in the ICMA virtual conference, UNITE. It just so happens that the very first session I listened to was hosted by the League of Women in Government. During the “Voice of Local Government Professionals” session, data was shared from a survey done with the League of Women in Government in partnership with ICMA. Look at small sample of the data they shared:

So, what do we do with this information? And what can we take from the life of RBG to move this needle? Here are a few thoughts for everyone.

Clerks who worked for RBG remember her fondly as a mentor who treated them like family, remembering her in very personal ways. When the clerks had children, she would send them onesies that said, “RBG grandclerk.” She would continue to mentor them long after they had moved on, giving them career and life advice. And, as one clerk mentioned during an interview with RBG, “For me to show up with two young children and for the justice to not see that as an impediment…was certainly a sign of progress that she had brought forth….”

Find that great life partner to support you.

Find someone that makes you feel exceptional, and believes that your work is as important as theirs. RBG often said of her husband “…he was the only one who really cared that I had a brain.”

Be a champion and aspirational of other women in our field.

It’s such a powerful way in which we can move each other forward. During her opening statement for the hearings of the Senate Committee on the Judiciary when she was nominated for the Supreme Court, RBG said “….in my lifetime, I expect to see three, four, perhaps even more women on the High Court bench….” This is incredibly powerful and visionary. And, by the way, a young attorney sitting behind Senator Biden during the RBG’s confirmation was none other than Elena Kagan, who would become the fourth woman appointee.

Recognize how cool it is to be a confident, hard-working female leader.

RBG left her mark in this area is so many ways—her coolness as a pop culture icon with books, movies, even workouts in her name—and as a legal scholar with an extraordinary gift for writing and speaking. And even as RBG was pressured to step down due to her age, this is what she said: “As long as I can do the job full-steam, I would like to stay here. I have to take it year by year at my age, and who knows what could happen next year? Right now, I know I’m OK.” And what better way to end this column! 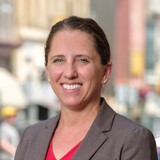 Most Popular Coaching Topics of 2020

ICMA CoachConnect participants reflect on their experience in the program during 2020.

What Is Your Professional Development Plan for 2021?

Four steps to learn how to add structure and intentionality to your professional development.

Career Compass No. 88: Leaders Are Dealers in Hope