Charlotte has undertaken several racial equity processes designed to improve community service delivery, including the ongoing use of a racial equity lens for city programs.

Charlotte has undertaken several racial equity processes designed to improve community service delivery, including the ongoing use of a racial equity lens for city programs. This has resulted in strategic capital investments in targeted neighborhoods. Following a report revealing economic inequity in the city and a police shooting in late 2016, the city engaged thousands of residents in one-on-one conversations and community meetings to collect ideas on how to improve equity and address racial bias community-wide.

1.  Project P.I.E.C.E Workforce Development Collaboration
The Partnership for Inclusive Employment and Career Excellence (PIECE) Workforce Development Collaboration program was started by Charlotte’s Economic Development department as an outgrowth of community conversations about economic inequity in the city. In 2016 a joint study by Harvard University and the University of California at Berkeley found that a person born into poverty in Charlotte has a lower chance of ascending the economic ladder than in any of the 49 other cities included in the study.

PIECE is a collaboration among the city, local businesses, and nonprofit organizations to provide construction-industry training and employment to economically challenged segments of the Charlotte community. Through neighborhood-level outreach, the PIECE program has identified hard-to-employ populations and provide them with the needed training to enter long-term employment as a skilled worker in the construction industry. Participants include people with criminal backgrounds, periods of chronic unemployment and low skill levels. Particular attention was spent on recruiting youth and people of color.

By working with Goodwill Industries and other nonprofits, PIECE trained 154 individuals in 2017 and employed 117. More than 50 businesses have signed on as partners with PIECE to assist with

2.  LEVEL UP Youth Program
LEVEL UP was started in 2017 to assist Charlotte teens by preventing crime, promoting health, and reducing academic summer regression. The initiative is a collaboration of the city, the YMCA, and an assortment of other nonprofit organizations. It was begun as a result of the Charlotte-Mecklenburg Opportunity Task Force’s “Leading on Opportunity” report, which recommended a variety of services to address teen crime, health and academic success.

The LEVEL UP program hosts activities at branch YMCA sites in low-income areas on weekend evenings and during the summer, during which volunteers from several youth nonprofits provide mentoring services, classes, and recreational activities. Additional opportunities include interacting with police officers, tutoring, and becoming part of longer-term mentoring and educational programs.

During 2017, LEVEL UP provided services to just over 1,000 teens and utilized 330 volunteers. A large majority of the teens were low-income African-Americans, and a majority were boys between the ages of 14-18. The program is gearing up for 2018 and has a goal of enrolling 1,500 teens and garnering 400 volunteers. The number of sites and activities will be expanded as well. Goals have been set for the teens to perform better in school, enroll in higher education, and show improvements in self-confidence.

3.  Smart District/North End Infrastructure
Charlotte is working to bring greater prosperity to its North End neighborhood, which is mostly African-American and low-income, through an innovative community engagement strategy aimed at connecting the area’s residents to technology and job opportunities that will improve their well-being. Residents’ ideas will be sought in four areas:

Many residents in the North End do not have access to the same infrastructure or amenities as other residents in other parts of the city. This project, dubbed the North End Smart District, is aimed at improving the health and economic well-being of people in the area by facilitating resident-driven initiatives to improve access to technology and to adopt environmentally sustainable practices.

A companion project will improve the physical infrastructure of the North End to make it more attractive as a location for high technology employers and as a place to live. The Applied Innovation Corridor Project partners with academic institutions to bring new businesses to the area. Extension of light rail and redevelopment of a housing district will make the area more accessible and attractive, while maintaining affordability for the existing population. 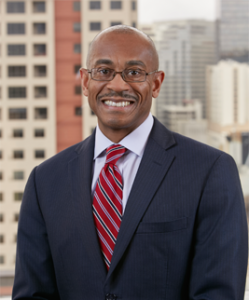 City Manager
Marcus Jones began his role as city manager of Charlotte on Dec. 1, 2016. Before moving to Charlotte, Marcus served as the city manager of ​Norfolk, Virginia, a role he began in February 2011 after serving the city from 2004-2009 as the director of budget and grants management and as an assistant city manager. As the city manager of the second largest city in the Commonwealth of Virginia, he helped Norfolk build on its competitive advantages as the urban core of a region of more than 1.7 million people. Marcus has 23 years of public service experience, which includes serving as a deputy secretary of finance for two governors in the Commonwealth of Virginia. In each case, he played a major role in protecting the Commonwealth’s coveted AAA bond rating and streamlining government operations. He has experience managing complex budgets ranging from $1.2 billion (local) to $50 billion (state). While serving with the state government, Marcus gained a strong reputation for his ability to negotiate complex financial and legislative issues across party lines. Marcus earned his bachelor's degree in public administration from James Madison University and an MPA from Virginia Commonwealth University.  Excerpted from the Charlotte, N.C., website: http://charlottenc.gov/CityManager/AboutUs/Pages/City-Manager-Marcus-D-Jones.aspx