Goodyear, Arizona, is the ninth fastest-growing city in the country, and with this growth comes opportunities for the city to be creative and forward-thinking in how it keeps its firefighters safe.

I’ve lived and worked in Goodyear since 2007, and I’ve been the Goodyear Fire Chief since 2013. One of the main reasons my family and I moved from Massachusetts to Goodyear was because the culture at the city of Goodyear resonated with me. The city focuses on providing exceptional customer service to the community through our six core values: adaptability, empathy, initiative, innovation, integrity, and optimism. These core values are further bolstered by the city’s culture statement, “We care, we achieve, and we celebrate.”

It’s a cliché to say that actions speak louder than words, but in this case, it’s true. The Goodyear City Council cares about all of the city’s employees, and it places a high priority on funding public safety. A high priority for me, as the fire chief with more than 110 firefighters on my watch, is to tap into the city’s core values to keep my entire department as healthy as possible, both physically and mentally. I want our residents to know that when our firefighters show up, they’re getting the best of the best.

Stopping Cancer Before It Starts

Cancer has become the number one concern among firefighters as an occupational issue1. It’s something I am all too familiar with as a first responder with more than 30 years of experience.

Within the span of just a couple of months in 2015, two Goodyear firefighters under the age of 40 were diagnosed with cancers that they got while working on the job serving others.

One of those firefighters is back on the truck and using his experience to lobby policymakers to change workers compensation laws in Arizona. Unfortunately, the other firefighter lost his battle to cancer, leaving behind a wife and two young daughters.

Goodyear has opened two brand new fire stations in the past 16 months, and we’re currently designing another new station. Thanks to the city council’s support and the city’s focus on its core values, especially innovation, these new state-of-the-art stations keep our firefighters as safe as possible.

We prioritize decontamination. After a typical house or car fire, firefighters’ equipment is covered in dangerous carcinogens.

In years past, it was a badge of honor to wear your equipment after a call, but we know better now. We hose off and scrub down everyone who was exposed to the smoke or fire before they leave the scene.

It is imperative that this is done before they remove their turnout gear completely and put it in specially designed compartments on our fire engines so they don’t get contaminants inside the cab.

We specifically designed the new stations to keep the clean side of the station clean and carcinogen-free. When firefighters return from a call, they immediately get their turnout gear and equipment washed in the extractor washers and then enter the decontamination corridor, where they get themselves cleaned up and ready for the next call. The Goodyear Fire Department is the first department in the Southwest United States to invest in Solo Rescue Decon Washers, which thoroughly clean firefighters’ air tanks and face masks. We currently have them in three of our stations, and they are strategically placed throughout the city to allow firefighters based at every station across the city to use them. 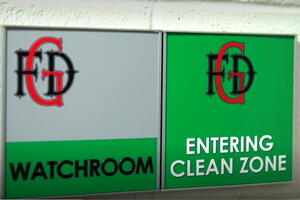 We also have showers and regular laundry facilities on the decontamination side so they can hop in, get any contaminants off their skin, and throw their clothes in the wash, too. Finally, a vestibule separates the clean side of the station from the dirty side of the station.

It’s OK to Not Be OK

The support that the Goodyear City Council provides to the Goodyear Fire Department is critical for keeping our firefighters safe, and they don’t strictly fund new buildings or trucks.

In 2016, the city received a federal grant to bring a psychologist on board for a year to help firefighters manage their mental health. She spent time building relationships and trust, and after the pilot year, the city council approved funding to continue this service to this day.

The psychologist is onsite one week a quarter, and she has created a trained peer support team to step in and help their brothers and sisters after a traumatic call when she can’t be there.

Mental health is equally as important as physical health. Similar to how we used to continue to wear our turnout gear after a gritty call as a badge of honor, firefighters have traditionally bottled up their emotions after a traumatic call and tried to ignore them. We know now that that’s not healthy, either, which is why I think it’s so important that we have the funding to support mental health. In addition to the psychologist, we also have a chaplain, and the city offers a free employee assistance program that offers free, confidential assessment and counseling referrals.

The Goodyear Fire Department is fortunate to have the financial support and general approval of the Goodyear City Council and city leadership as we continue to seek ways to keep our firefighters safe. I know that not every department has this level of support, but in closing, here are my suggestions for what steps other agencies can take to keep their crews safe: