America finds itself in turmoil because we have failed to address racism and the inequities that it perpetuates. [PM Magazine, June 2020 Special Supplement]

The level of protest and violence gripping urban America as the summer of 2020 begins is the most extensive unrest since the urban uprising in the 1960s. The protests are inspired by the callous treatment of George Floyd by a Minneapolis police officer while other officers watched with nonchalance and a bystander pled for the officers to stop. Mr. Floyd’s murder was painfully captured by video, making it impossible to deny what happened.

Every police officer, police chief, city manager, and elected official needs to watch the entire video and ask the question, “Could it happen in my community?” In most cases, the answer is yes. This leads us to two questions addressed herein: Why do we find ourselves in this situation in 2020? And can America demonstrate that black lives matter?

How Did We Get Here?

America finds itself in turmoil because we have failed to address racism and the inequities that it perpetuates: economic disparities, health disparities, and police violence.

Economic inequities combined with health inequities put African Americans and other people of color at disproportional risk for COVID-19. The pre-existing inequities have been documented by the National Academies of Science, and the CDC has documented the devastating consequences of the virus. Now as the economy resumes, we may see spikes of additional illness and death among people of color.

In 2013, I outlined the economic inequities and the threat that they posed to social order:

“Will the have-nots become increasingly frustrated in ways that will spill out into social disruption? Will growing numbers of people find their dreams deferred, and will those dreams dry up, like Langston Hughes’s raisin in the sun, or will they explode? Large-scale urban unrest has not occurred in the United States since the 1960s—especially 1967, when there were eight major incidents of urban violence and damage. Could such an explosion of urban unrest occur today?”

Combining economic and health inequity with police inequity gets us to the present situation. In 2015, Sarah Hazel and I examined race and police violence:

“The public has become suspicious of police, police have become suspicious of the citizens they are there to protect, and both police and people have become suspicious and disenchanted with senior local government leaders, who too often are ill-prepared to deal with the conflict.… There is a compelling need for local government professionals to address these issues before another crisis occurs, to have a frank discussion about race and the country’s history of predominantly white government leaders and white police departments, and about the extent of marginalizing African American and other minority communities. Cities that avoid the hard discussions do so at their own risk.”

The crisis has arrived, and the risk revealed.

Many cities have worked on police reform since 2015. The White House convened a diverse task force that produced a report on twenty-first century policing. The foundational principle was “building trust and nurturing legitimacy on both sides of the police/citizen divide.” Many cities have used the report as a blueprint, deploying body cams, teaching de-escalation techniques, and engaging in community relations events. Nonetheless, police violence continues to occur without accountability or justice. In addition to George Floyd, there is also the recent case of Breonna Taylor, who was gunned down in her Louisville home by police executing a no-knock drug warrant on the wrong house. And, the list goes on and on.

History does not offer much hope, but it does offer a pathway. It would be dishonest to suggest that there have been no racial improvements over our history. As horrific as today’s violence against African Americans is, it cannot compare to the violence that occurred during the Jim Crow era or during slavery. That racial violence still occurs at all is unfathomable.

History teaches us that two conditions are necessary for change. People must stand up for their rights and people in power must respond.

Justice Must Be Demanded.

People who are oppressed must demand justice. Without Frederick Douglass, Sojourner Truth, Harriet Tubman, Nat Turner, and others, slavery would have lasted much longer. Without the initiatives of the NAACP and the incredible bravery of African American families and the court cases they brought in the 1940s and 1950s, Jim Crow would have had a much longer life. Without the marches in Birmingham and Selma, where people put their lives on the line, the Civil Rights Act and Voting Rights Act would have never passed in the 1960s.

People with Power Must Be Allies.

White people in power must be willing to stand as allies and use their power to enact the reforms sought. The Radical Republicans in Congress along with President Abraham Lincoln were able to end slavery. The white members of the Supreme Court had to defy precedent and overturn Plessy with a proper reading of the Fourteenth Amendment in Brown. President Lyndon B. Johnson, a white southerner, was the champion of the Civil Rights Act and Voting Rights Act. The relationship between President Johnson with Dr. Martin Luther King Jr. enabled groundbreaking legislation that otherwise may have never been adopted. President Johnson lost the presidency. Dr. King lost his life.

While we lack the overwhelmingly powerful voice of a President Lincoln or Dr. King, if enough people unite, change is possible. A wide range of elected and appointed officials are speaking up, along with business leaders. Other promising signs include police chiefs joining their mayors in denouncing police violence and police officers showing solidarity with protestors, taking a knee in respect or marching with protestors. Marchers have been racially diverse, including young white people who have had more exposure to diversity than earlier generations.

It is not likely in the polarized national political environment that national reform will occur. States and cities, however, can reform their own police departments. We forget that local police were responsible for enforcing slavery, enforcing Jim Crow, and implementing mass incarceration. It is a long journey to reform an entrenched culture. Reform begins with an articulated commitment to change, combined with more oversight, transparency, the ability of police chiefs to remove officers for misconduct, and a willingness for local prosecutors to hold officers accountable for criminal acts.

Reform requires police officers and police unions to have the courage to break the code of silence and intervene when misdeeds occur. The video of George Floyd illustrates how compelling this last point is. Had the three other officers on the scene said, “Stop,” Mr. Floyd would be alive today. Police officers and police unions must decide if they will drive institutional racism from their departments and become symbols of institutional justice.

Among Dr. King’s many compelling words are these, “In the end, we will remember not the words of our enemies, but the silence of our friends.” This is not a time for white people to be silent. Silence is complicity. We must all stand with the family of Mr. Floyd and so many others and, unlike the officers on the street that fateful day in Minneapolis, say, “Stop.”

Visit icma.org/social-justice for additional resources for local government leaders as they address the current crisis of public trust, civil unrest, and social justice. 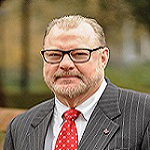 DR. RON CARLEE is an assistant professor at Old Dominion University. He previously served as city manager of Charlotte, North Carolina; chief operating officer at ICMA; and county manager of Arlington, Virginia. He began his career as an assistant to the mayor in his hometown of Birmingham, Alabama.

Conversations with Courageous Leaders in the Local Government Profession