Rethinking Local Government Revenue: Why the Time Is Now and What Can Be Done

ICMA, GFOA, and a host of partners are working together for the Rethinking Revenue initiative to consider new ideas for raising local government revenue.

A large majority of Americans think we need substantial changes in our political system. How revenues are raised are a big part of that system and people’s intuition that change is necessary is not wrong. Local government revenue systems are becoming outmoded in two important ways.

First, is technical obsolescence—revenues have not kept up with the evolution of the economy. Two obvious examples are: (1) fuel taxes do not account for the increase in fuel efficiency and electric vehicles, and (2) cable television franchises do not reflect the “cut the cord” phenomena of consumers leaving traditional cable television for online alternatives. This trend also extends to the largest local government revenue sources—property taxes and sales taxes. Sales taxes do not tax services, yet the long-term trend is that people are spending more of their income on services and less on goods.2 As for the property tax, property is not the store of wealth it used to be. Financial assets have increased as a share of a family’s total assets, from 31 to 42 percent. The relative share of wealth derived from primary residences and equity in nonresidential property both decreased.3

More broadly, any time a one-size-fits-all fine or fee is levied, it will fall more heavily on low-income residents. A charge of questionable fairness can also be levied at the sales and property tax. Low-income individuals typically spend a higher portion of their disposable income on taxable goods, so the sales tax falls more heavily on them. One might think the property tax is fair: the taxes paid scale up with the value of the property. However, property assessment practices have made it so that the burden of the property tax falls disproportionately on the owners of the least valuable properties. To illustrate, property valued in the bottom 10 percent pays an effective rate that is double that of property in the top 10 percent on average across the United States.5

The sources of revenue a local government uses to fund itself should reflect the bedrock value of democratic systems of government: fair and equal treatment.6 However, the current unfairness in the local government revenue system is not consistent with that value. Bringing our systems of local government in line with this fundamental value and creating a fairer tax and fee system is more important than ever with declining citizen trust in government.7

What’s the Scale of the Problem? 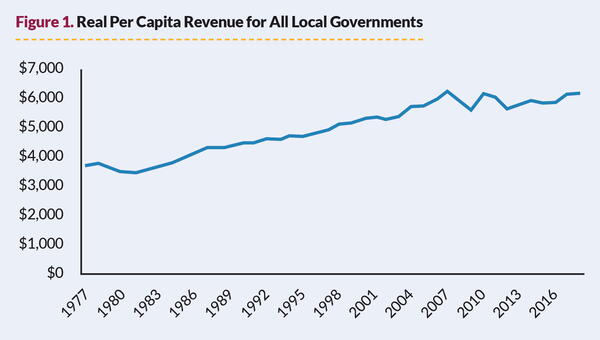 First, user fees make up an increasing portion of many local government budgets. For example, an in-depth study of the 39 largest cities in the United States showed that from 2003 to 2018, charges grew so much as to equal tax revenue for half the cities. User fees are the most regressive form of local revenue.

Second, the extent to which a local government’s population increases and the wealth of its citizens’ increases will impact the extent to which revenues stay at least even with expenditures. One study of larger cities found that from 2003 to 2018, larger and wealthier cities enjoyed revenue growth in excess of expenditures, while smaller and poorer cities had higher growth in expenditures than revenues.9 A rethought revenue system should provide all communities with revenue options responsive to local economies and that keep up with the cost of public services.

Where to from Here?

ICMA, GFOA, and a host of partners are working together as part of the Rethinking Revenue initiative to consider and propose new ideas for how local government can raise revenue. Though the initiative is still in its early days, we already have a number of proposals out now. Let’s review a few of them. You can delve into the details of these proposals and more here.

Local governments might be sitting on a metaphorical gold mine. Just as a private individual or corporation uses assets (like machinery and buildings) to generate income, governments can generate income from their assets. Urban Wealth Funds (UWF) are assigned government assets with commercial value under unified, professional management who own and manage these assets for the betterment of the local community.

We can illustrate with a basic example. Let’s say a city owns vacant or underutilized land—imagine a municipal garage along a river in an area where waterfront property is now a hot commodity. If the conventional government approach to asset management recognized this opportunity at all, a common response might be to simply sell the land to a private developer. A UWF tracks all government assets and their true market value, and then promotes development of those assets to generate resources for the public benefit commensurate with their true market value. So, in the case of our waterfront garage, the UWF might redevelop the property into a more valuable use, but retain an ownership interest in the property so that the public enjoys a substantial portion of the financial benefit.

UWFs have been used by governments in Europe and East Asia to generate billions of dollars to fund local infrastructure while maintaining public control of these local assets. A few local governments in North America have begun to explore UWFs as well. In fact, the Rethinking Revenue initiative is working with Schmidt Futures, the Lincoln Institute of Land Policy, and the Sorenson Impact Center to launch an Urban Wealth Fund incubator program as a first step to harnessing the power of UWF on a large scale in the United States. Local governments who are interested in becoming part of this incubator cohort can find more information at gfoa.org/rethinking-revenue.

Segmented Pricing for Fines and Fees

As we discussed earlier, fines and fees have become a much more important part of local government revenues. While it is probably advisable to eliminate certain types of fines and fees, many others do have a valuable role in not only the revenue portfolio but influencing public behavior to pro-social ends. But the problem of fairness remains: the one-size-fits-all nature of how fines and fees are set makes them regressive. What if we could, instead, set fines and fees to the level that a given individual ratepayer could afford, no more and no less?

As it happens, this approach, called segmented pricing, is widely used in the private sector. When a salesperson is authorized to offer you a discount if you won’t buy at the full price, that is segmented pricing. Government segments prices, too—senior citizen exemptions assume that fixed-income seniors have reduced ability to pay property taxes, so they get a lower “price” for their tax bill. The same concept can be applied to fines or fees. Not only would this be fairer—everyone pays what they can afford—it has the potential to actually increase revenue! If a fine or fee is set above a low-income individual’s ability to pay, they probably won’t pay it, especially if they are faced with the choice of paying the fine/fee or paying for rent, food, etc. Segmented pricing finds the amount they are able to pay and avoids the creation of municipal debt and all the disadvantages that entails for all involved. The Rethinking Revenue initiative, together with the University of Chicago’s Center for Municipal Finance, is developing a pilot program to use artificial intelligence and machine learning to find the most efficient price points for local government fines and fees.

For example, Lancaster, California, recognized that it had assets like underutilized space in public buildings, city staff eager for new challenges, a strong public purpose (a goal to become a “net zero” city), and given its location in the Mojave Desert, the sun! This led the city to first install solar panels on city property. Success generating energy and selling excess back to the energy grid led it to partner with the local school district to install more panels at school sites. After that, the city was able to allow community members to buy energy directly from the city. Currently, over 90 percent of eligible accounts participate in the city’s energy program. Today, the city’s energy program accounts for $40 million of a total $234 million city budget, and the energy program more than covers its costs. Of course, not every local government can become a solar power success story, but every local government has assets, physical or otherwise, that could have potential that can be unlocked with entrepreneurial thinking.

Legal action is an important lever for local governments to achieve policy goals, enjoin harmful activity, and receive monetary compensation for damages suffered. However, the cost of litigation and greater legal resources available to well-funded defendants means that many local governments cannot realize the full potential of litigation. Legal financing is an established practice among private firms for financing and reducing the risk of litigation. Legal financing is essentially venture capital for litigation, where private funders back legal action they believe has a good chance of succeeding in exchange for a portion of the eventual judgment or settlement.16 Could it be time for local governments to start using legal finance to pursue lawsuits that seek to vindicate the public’s interest (“affirmative litigation”) and receive compensation that could be used to help address community problems? The Rethinking Revenue initiative has partnered with the International Municipal Lawyers Association to explore this possibility.

How Can You Get Involved?

If you’d like to be part of Rethinking Revenue, please let us know at https://www.gfoa.org/rethinking-revenue. We’ve heard from a number of government officials that want to be an active part of creating a new revenue system. For example, if you are interested in the pilot/incubator programs we’ve described, let us know. We’d also love to hear suggestions for specific revenue issues we should examine. And, of course, if you’d like to simply stay informed of the latest developments in the Rethinking Revenue initiative, let us know and we’ll keep you apprised. Today’s local government revenue system need not be a permanent feature of American life. Together, we can update it to better serve our communities. 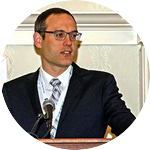 SHAYNE KAVANAGH is the senior manager of research for the Government Finance Officers Association (GFOA).

2 This trend reversed during COVID, but as COVID becomes endemic and society normalizes we might very well expect this trend to resume.

3 Based on data from the Federal Reserve’s Survey of Consumer Finance.

6 For example, in the March 2021 edition of the Grinnell College National Poll, 92% of respondents described “equal treatment regardless of race, religion, and other traits” as “very important” in a democracy, beating out “free speech” (82%) and “peaceful transfer of power” (80%) and tied with “free and fair elections.”

8 Data is from the Urban Institute’s State and Local Fiscal Conditions data set. In this data set inflation adjustments are based on the consumer price index. There is reason to believe that local government’s costs may often increase faster than the consumer price index because governments purchase a different set of goods. However, even when we account for this the real, per capita revenues of government have gone up.

Rethinking Budgeting: Are We Ready for a New Approach? 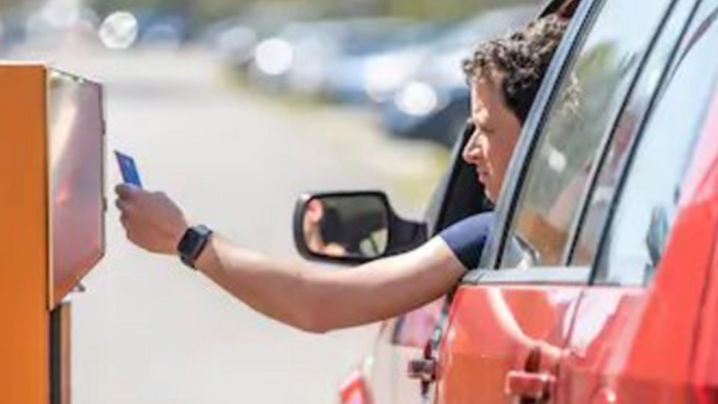 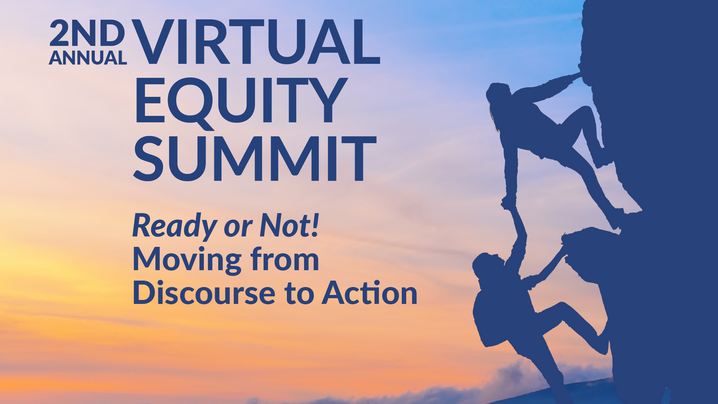 ICMA's second annual Equity Summit covers how you can leverage the budget to advance equity in your community.