As of 2018, there were approximately 18 million U.S. military veterans, three million of whom were under the age of 40.1 Practitioners and researchers alike have given considerable attention to the federal government’s recruitment of U.S. military veterans into public service in recent years, especially as it relates to the use of veterans’ preference policies.2

We built a sample of 911 cities and towns ranging in population from 25,000 to 250,000, as well as 575 counties from the largest 1,000 counties in the nation. We then distributed the survey over a period from February into June of 2020 (with a pause of several weeks due to the outbreak of COVID-19) to HR directors (or equivalent) using multiple mechanisms: mailed letters, postcards, emails, and phone calls. We collected 538 usable responses to analyze from our city and county HR directors.

We asked a series of questions designed to illustrate the extent to which local governments are implementing a veteran’s preference policy. Overall, just over half of local governments (52 percent) reported giving some form of a formal preference to U.S. military veterans in hiring processes. We were also interested in whether HR directors perceive these policies to be clear. Such policies need to be clear and understood by those responsible for implementation. We therefore asked about how specific their preference policy is on an 11-point scale ranging from very vague to very specific. About three of every four respondents (74.5 percent) scored their policy at “7” or higher on its specificity. Only about 8.3 percent said their policy was vague, with scores at or below “3.” While they reported relatively good specificity, less than two-thirds (57 percent) rated their policy “successful” at promoting veteran hiring.

When we asked the HR directors to rank the skills that military experience enhances the most, they responded: (1) teamwork, (2) problem solving, and (3) planning/organization. 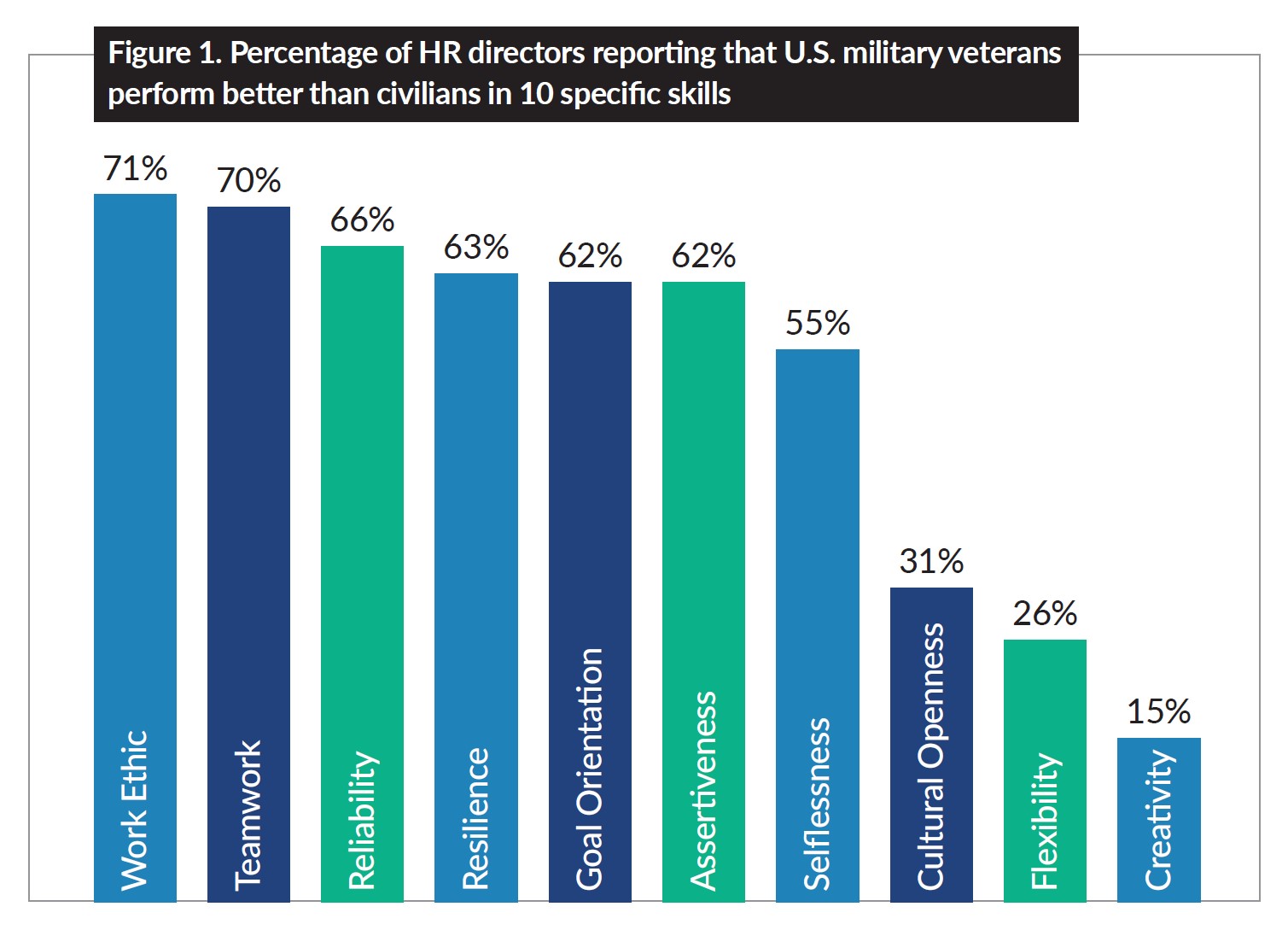 Many local governments miss the opportunity veterans represent to tap these skills. Even those jurisdictions that recruit veterans to apply for jobs sometimes funnel them to positions in law enforcement and public safety. In fact, the vast majority of responding HR directors said they think military service is relevant preparation for positions as public safety officers (93 percent) and firefighter or medical (90 percent). Perhaps not surprisingly, these respondents also reported that their organizations hired veterans into these positions at higher rates than other types of positions (81 percent and 71 percent, respectively). See Figure 2. 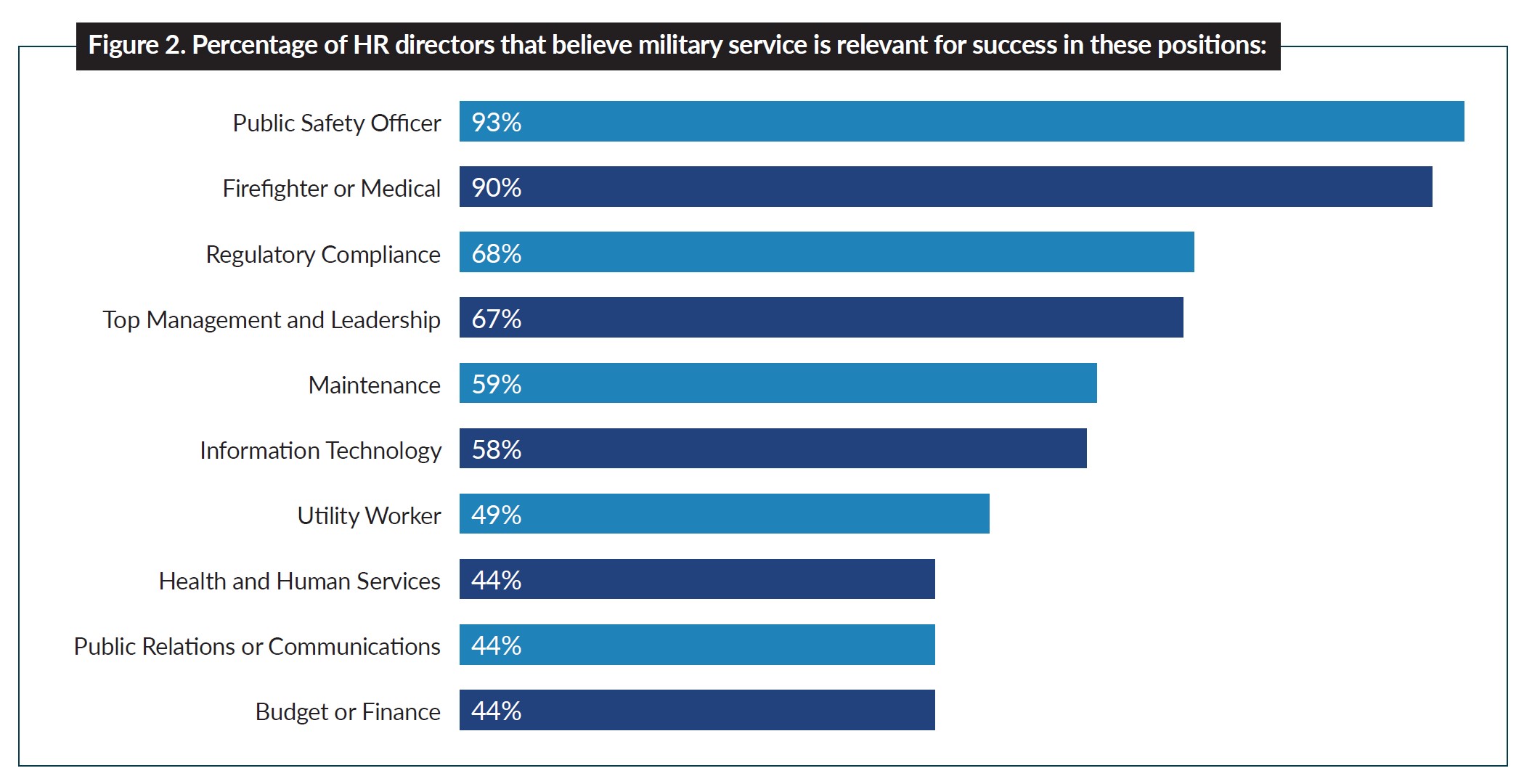 However, many veterans resist this pigeonholing while seeking other positions they feel better fit their skill set. For instance, two-thirds (67 percent) of responding HR directors said military training is relevant for preparing someone to be successful in top management or leadership positions. However, only one-fifth (20 percent) said their organization “often” or “very frequently” hired veterans into such positions. Local governments are missing the wider array of skills represented by those veterans trying to get into public service after their military service is complete.

The Premium on Veteran Experience

While HR directors may be missing some of the talent represented by veterans, this does not mean the directors are dismissing the value of military experience. In fact, there is a common misconception that HR directors may have a negative bias toward veteran applicants due to possible experiences during their military service. Our results suggest otherwise.

We presented each respondent one of six randomly assigned résumés of a hypothetical recent MPA graduate that were identical except on gender, military experience, and previous local government versus private sector experience. The preliminary results clearly suggest that while there are no differences between male and female applicants in terms of the evaluation provided by the directors, they rated the candidate résumés with veteran experience more highly when assessing leadership potential and value of public sector experiences relative to prior experience in the private sector.

HR directors indicated that local governments undertake a range of activities in order to attract and recruit veteran applicants to their organization. For instance, we found that half of these local governments post job advertisements in outlets that specifically target military veterans. However, only about 17 percent take advantage of veteran student centers on nearby two- or four-year college campuses. See Figure 3. 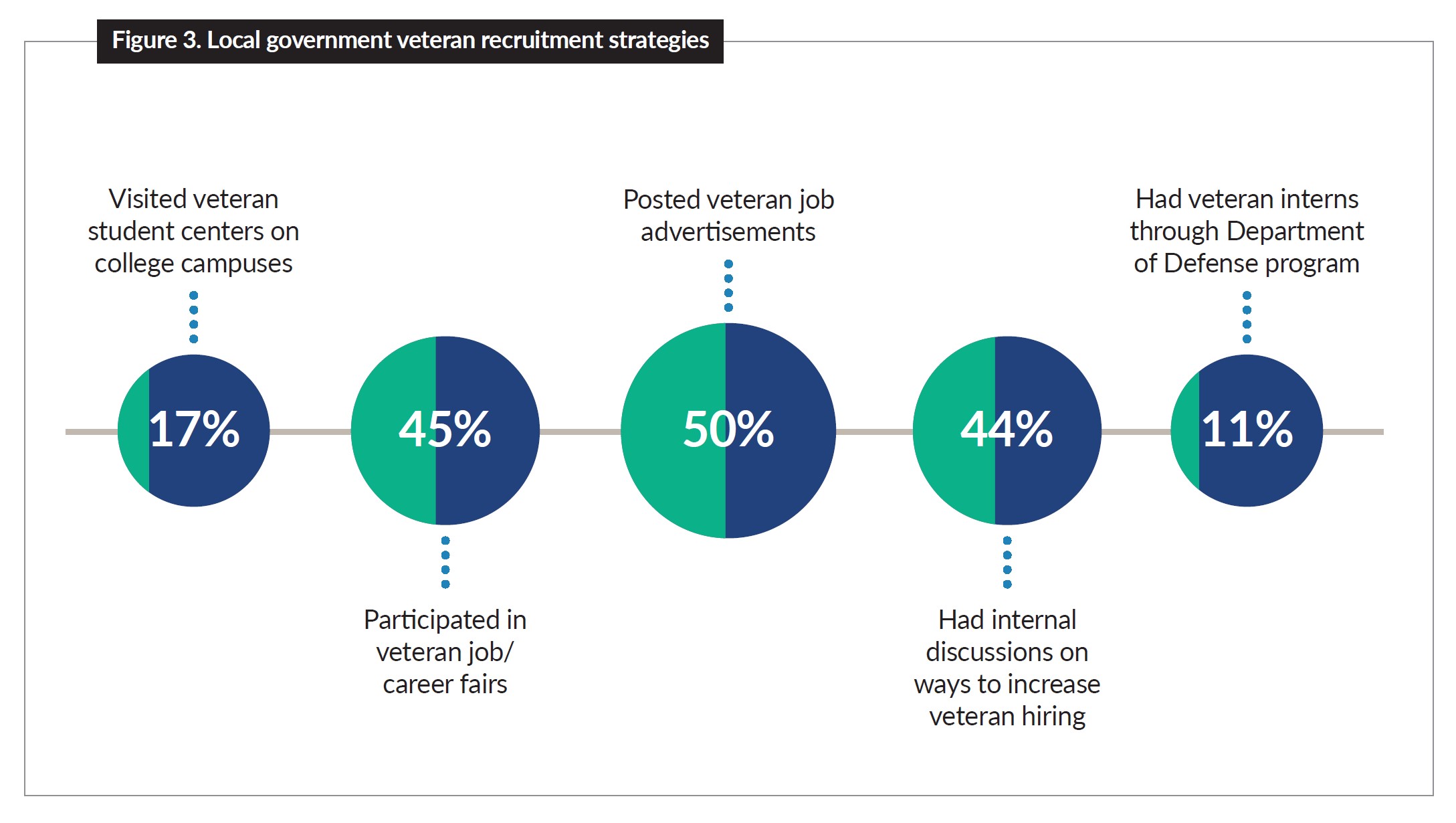 While these efforts are important, we have noted previously that local governments may not be taking full advantage of the broad range of public service careers and functions for which military service may prepare individuals. If recruitment efforts focus on jobs in law enforcement and fire/emergency response, local governments may be missing excellent candidates for leadership roles, IT, budgeting and finance, and other positions. Colleges and universities can help local governments expand the exposure to, the appeal of, and the range of public service opportunities in a manner that increases the talent pipeline.

Through their strategic outreach to city/county administrators, HR directors, and other professional associations, ICMA’s veterans programs are helping increase career connections between veterans and local government.

The findings from our survey highlight several insights into current veteran recruitment and hiring practices in U.S. local governments. Many jurisdictions recognize the value in recruiting future public servants among U.S. military veterans by giving preference to veterans in hiring and/or promotion decisions. They see veterans as competent workers, outranking their civilian counterparts on a range of general and technical skills and competencies. Yet, at the same time, there is a narrow and limited recognition of the functional areas and types of positions to which U.S. military veterans’ skillsets apply. We find that HR directors see a very strong “fit” between veterans’ skills and positions within law enforcement and emergency response, but much less so for other positions such as IT, budget/finance, and management.

To reap the immense potential more fully that veterans hold for contributing to the work of U.S. local governments, we recommend jurisdictions start applying a broader and more encompassing approach to the functional areas in which U.S. military veterans can excel. This task does not simply fall on U.S. local governments, but also highlights a greater need for mapping out and designing successful curriculum and educational programs to help veterans transition and adapt their existing skills to the new world of public service in a local government context.

1 Statistics and other data available from the U.S. Department of Veteran’s Affairs at https://www.va.gov/vetdata/veteran_population.asp
2 For details of the federal policy, see https://www.opm.gov/policy-data-oversight/veterans-services/vet-guide-for-hr-professionals/ 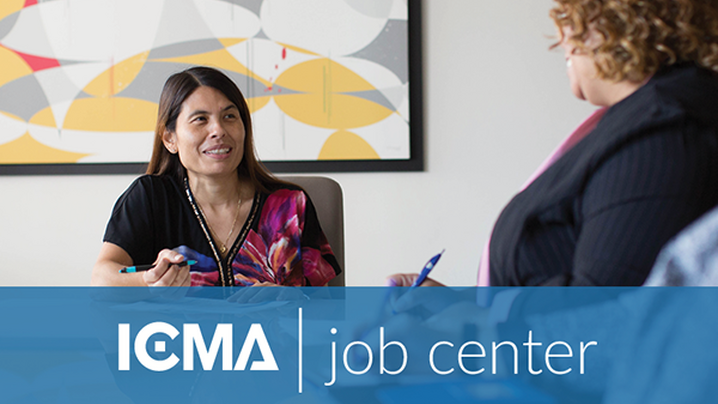 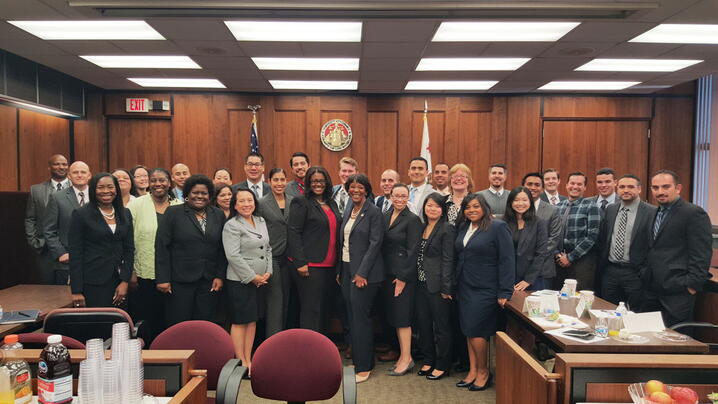 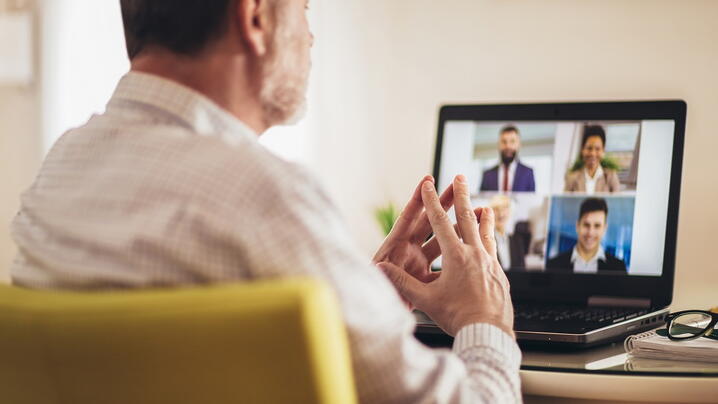 How Local Governments Are Adapting to Hybrid and Remote Work

The expansion of hybrid and remote work offers a unique opportunity for local leaders to be innovative. 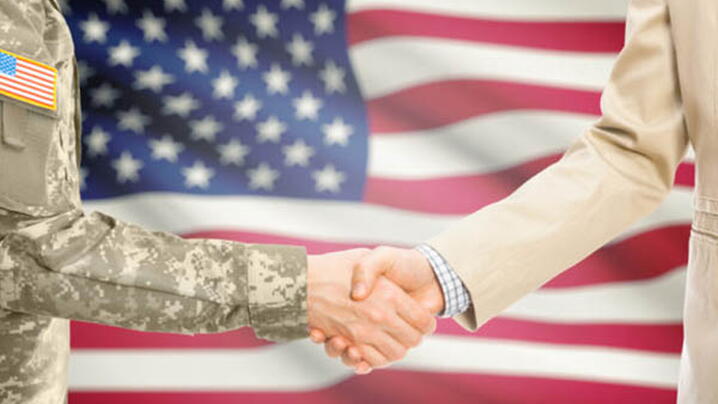 In recognition of Veterans Day, ICMA gathered a unique panel of veterans who did not let discrimination dull their success, to speak about their journey in public service—from the military to local government.