ICMA surveyed local government chief administrative officers about their priorities for using the American Rescue Plan Act (ARPA)’s Local Fiscal Recovery Funds, based on available guidance as of September 2021. More than 530 town, city, and county managers responded. Two-thirds of the responses came from communities of 25,000 or fewer residents, which fall under the FRF definition of “Non-entitlement Units (NEUs).” This article highlights preliminary findings based on data collected through September 20, 2021.

Infrastructure was the top investment priority for communities of all sizes, followed by replacing lost public sector revenue. 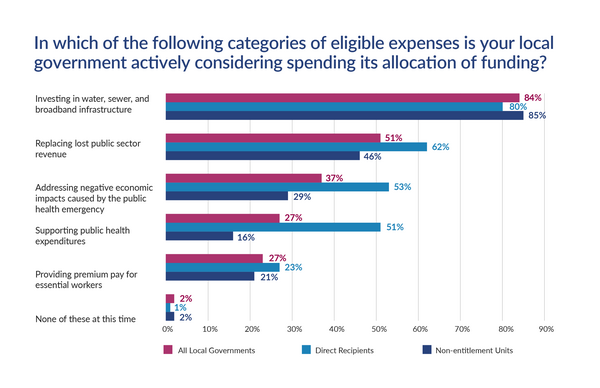 Overall, half of the survey respondents anticipate replacing lost public sector revenue according to Treasury’s guidelines. Direct recipients are more frequently considering this option, as well as addressing negative economic impacts of the pandemic and supporting public health expenditures. 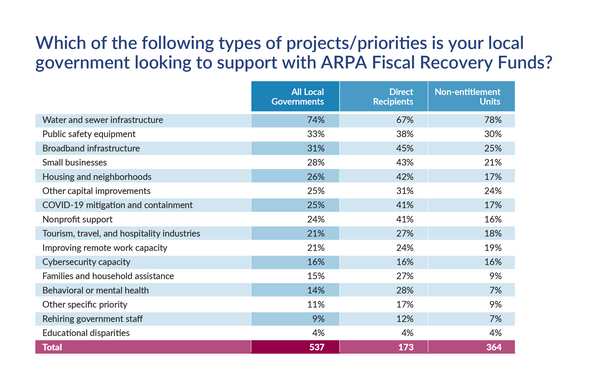 While many local governments are continuing to gather information and explore potential investments, some have already taken steps to launch or advance initiatives made possible with fiscal recovery funds. Examples include:

Nearly half (47 percent, not shown in chart below) of overall respondents anticipate hiring or designating coordinators for overall planning and management of these funds. Local governments are more frequently looking at hiring or designating this role internally, but 23 percent overall (more frequently direct recipients) are considering engaging external consultants.

Overall, one-third of respondents are considering regional collaboration on a project or investment. Fourteen percent of direct recipients anticipate transferring at least part of their allocation to another entity. 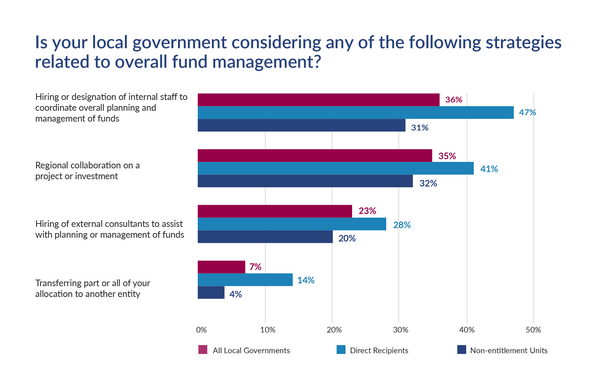 Capital improvement plans are highly influential in setting priorities for Fiscal Recovery Fund spending, used by three out of four communities as a part of their planning. Approximately 40 percent of NEUs and over half of direct recipients are utilizing strategic plans developed prior to the passage of the Rescue Plan legislation. Half of responding direct recipients and a quarter of responding NEUs have developed new recovery/ARPA-specific plans within the last several months. A quarter of local governments have conducted community engagement activities specific to pandemic recovery and ARPA opportunities. 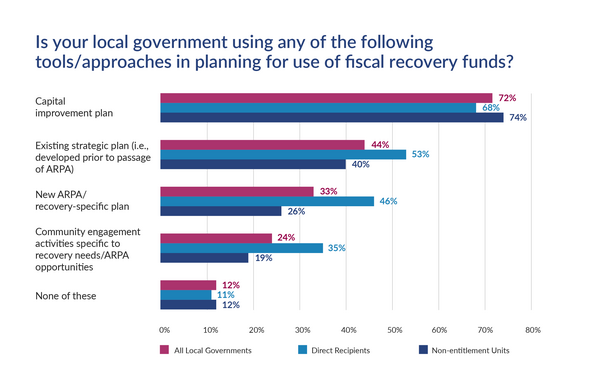 Respondents are anxious for final guidance from Treasury, with some specifically noting risk-averse governing bodies reluctant to make any commitments until final guidelines are issued. Others remain hopeful that Treasury will clarify ambiguities or amend guidelines on revenue loss provisions and eligible infrastructure projects beyond water, sewer, and broadband.

ICMA will continue to collect information about local government priorities, processes, project examples, and questions regarding ARPA’s Fiscal Recovery Funds, including at our upcoming conference. Findings and examples will be available on our dedicated ARPA resource page, and local government leaders can also share related questions with ICMA via this form.