What do you do when you have a stretch of road where people drive too fast, you've tried all the usual ways to try to get them to slow down but nothing works? 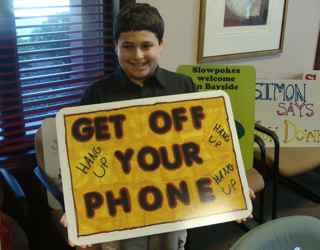 What do you do when you have a stretch of road where people drive too fast; you’ve tried all the usual ways to try to get them to slow down but nothing works?

For Bayside, WI, (pop. 4,420) it was a chance to involve the entire community in problem solving.

There’s a heavily-traveled stretch of road in Bayside that has a 35-mph speed limit. Many pedestrians and bicyclists, as well as children on their way to school, have to cross the road.

All the usual measures were already in place — traditional signage, flashing lights, 15-mph school zone — but drivers either didn’t notice or just ignored them.

In early 2011, residents were ready to find a solution that would stick.

Inspired by how Needham, MA, handled a similar problem, Village Manager Andy Pederson decided to look for a completely new and different approach.

Pederson believes that how you solve problems is as important as the solutions themselves. In the process of making a road safer, he also wanted to raise awareness in the community, attract buy-in by all the municipal departments, and create a new way for the village to think collectively about issues.

And by involving residents in the process, Pederson figured, they just might learn they could be partners with their local government and not simply wait for the problem to be fixed.

Pederson decided to launch an Emotionally Intelligent Signage contest. He would challenge the village’s kids to create signs to persuade motorists to slow down and stop at crosswalks. The winning designs would be made into signs.

The contest kicked off with an announcement in Bayside’s regular weekly email and received a resounding response.

Schools incorporated the contest into their classroom syllabuses. A local arts and crafts business held a Sign Design Night, when children could use the business’ supplies to create a sign to enter into the contest. Local, state, and national media covered the project. Business strategist Daniel Pink even mentioned it in his blog.

Pederson and his team organized a number of community events to make sure that as many residents as possible could participate in choosing the winners. Students and teachers at each of the three local schools viewed the entries and voted. The village hall displayed the entries during business hours and town hall meetings offered judging and voting along with education on crosswalk safety. Residents could view all the entries and cast their votes on the village’s website. The village even hosted a gathering in the park for evaluating and judging the signs.

Out of 4,500 residents, 2,500 votes were cast, winnowing the field to 25. Then a seven-member panel of village residents and staff evaluated the signs on originality, creativity, intuitiveness, readability, appeal to different generations, and overall impression.

The panel chose 12 designs to be made into traffic signs. The designs are rotated every three months to keep them fresh.

The contest inspired some residents to volunteer as crossing guards at the busiest intersections, so the village’s police department trained and equipped them with reflective vests.

And the village’s speed studies document the project’s success: drivers are now observing the speed limit.

View photos of all the entries.

Read an article Andy Pederson wrote for the Michigan Municipal League on the contest (pg 13).

Village Manager
Andy Pederson has served as village manager of Bayside, a community of 4,400 on the shores of Lake Michigan and on the northern boundary of Milwaukee County, since 2005. Before coming to Bayside, Pederson served as assistant village manager/community services director of the village of Brown Deer, human resources director/special projects coordinator of the city of Whitewater, and assistant to the city administrator of the city of Apple Valley, MN. He has a special interest in the effective use of communications, social media, and civic engagement. Pederson received his MPA from Hamline University.