Done well, online community engagement can really change the way the community feels about a city or county.

Cities and counties around the world are using online community engagement to broaden the scope of their public outreach and to mine deeper, more thought-provoking feedback and connections between governments and the public.

Most local government staff who have been involved in more traditional face-to-face forms of engagement understand that they rarely reach more than a very small and unrepresentative part of the community. This group is usually comprised of those who will speak their mind in any forum and often invite, even sometimes embrace, hostile environments and discord. The result is an underwhelming representation of public sentiment, lacking in breadth and depth of interaction, and often high on wasted emotions.

Consider, on the other hand, the use of technology in allowing this interaction to take place online, offering convenient access for a greater number of people in a more private space. This forum, using online tools, creates a safe and friendly environment for people to share thoughts and feelings in a much less threatening and more personal way. Members of the community can use technological tools in an engagement platform with the comfort and security of knowing that they are being heard and will not be shouted down. Yes...they may even feel included and loved!

Online community engagement is not a panacea. Done badly (and it often is), it makes absolutely no difference. However, done well, it can really change the way residents feel about a city or county. Coincidently, the city or county itself may also experience a boost in confidence and positive feelings about interacting with its residentss through online engagement, when the interactions start to become more productive.

For the sake of argument, let’s assume your organization thinks hard about engaging the community online and does the job well. You make an effort with regular engagement and feedback, build an online community over time, and your community gets used to being able to express and discuss its views. You utilize software tools that encourage participation and the articulation of thoughts and feelings through two-way dialogue.

What’s the payback for this and how will you and your community feel about it? Looking at some of the most elementary positive feelings born out of interaction and inclusion, i.e., trust, confidence, and transparency, it becomes clearer that online engagement paves the way for better, healthier, and happier relationships between you and your community.

Emotionally there are some parallels between online community engagement and the function of online dating, which is a widely used example of technology and the human emotion merging to create a positive outcome. Two parties are looking to make a connection and begin the dance of exchanging information about themselves, articulating personal perspectives and preferences, and ultimately agreeing to meet.

This process brings the most vulnerable of emotions to the forefront and yet millions of people take the risk of this vulnerability behind the veil of technology in an online space, finding it more convenient and less threatening than meeting people in public venues.

By the same token, online engagement provides the forum to introduce a project, disseminate and gather information, solicit feedback, share images and surveys…..all with the intent of building that bridge and relationship between government and community.

There is a growing body of evidence behind the more positive emotions that sustained and regular online engagement can bring. The Australian research company, Micromex Research and Consulting, conducted an analysis of satisfaction with the performance of Australian municipalities based on over 30,000 interviews in 2011.  They found that when respondents were asked about how they measured a city’s performance, they resorted to listing basic services, such as roads, rate levels, and trash collection. However, other factors came to the fore when revealed preference analysis was carried out.

It should come as no surprise to learn that a community feeling well informed about a municipality’s business, with opportunities to be part of the formation of policy, would be happier with the institution. The Micromex study showed that the extent to which the community feels engaged is consistently one of the most important factors explaining community satisfaction.

The Edelman Trust Index researchers have noted an increasing gap over the decade between the well informed and poorly informed publics with regard to trust in our public institutions. This gap is growing in most developed nations including the USA, Canada, Australia, and the UK. 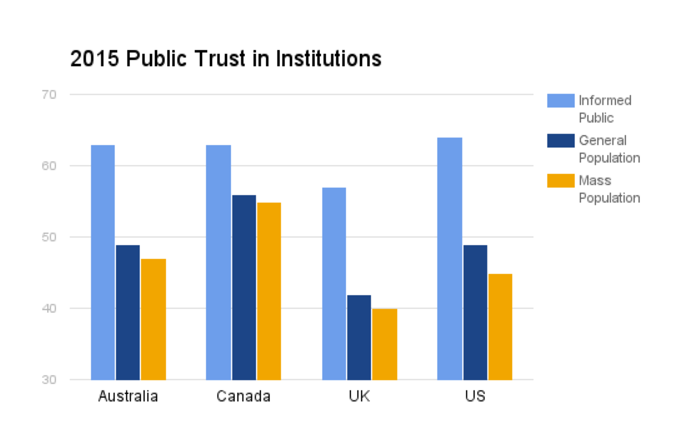 At the same time, peer-to-peer influence is becoming more powerful than top-down information sharing, which makes it even more important for institutions to get good quality, accurate, shareable, information into the hands of their best networked community members.

Simply put, the better and more accurately informed and involved that our community is, the more likely they are to trust the institution that is engaging them. Trust is something that has been in short supply in many communities. Edelman Trust research clearly suggests that engagement is one way to build stronger trust with your community.

Finally, we should consider ‘outrage’ one of the most visceral of human emotions. When the community is outraged, it’s actually very hard to have any sort of a constructive dialogue. Almost all ‘outrage’ is provoked by a sense of disempowerment, of not being listened to, or of unfairness in a process. Strong and regular online engagement will reduce the risk of outrage because your community will always have access to you, meaning that you will be able to identify issues that could lead to outrage early and deal with them. This, incidentally, will save you a great deal of time and money.

How often have there been plans for an infrastructure project that flounder at a late stage because of community protest?

How often do we see carefully prepared strategies turned over by a newly elected official because the strategy had no broad-based community support or understanding?

How often do we see resources being used up in lengthy and expensive legal appeals?

Using online tools to engage the community is an excellent way to broaden the reach of your community engagement activities. This is a necessary precursor to your community feeling engaged and valued, rather than overlooked or ignored.

Use of technology to cultivate the exchange of ideas, feelings, and opinions cultivates deeper, more meaningful relationships between governments and communities. Every day online activities such as online dating give us insight into the emotions associated with use of online engagement tools to build trust.

Cities and counties that make the effort to use online engagement tools on a regular and consistent basis can expect their communities to be more satisfied with their overall performance, to trust them more to make decisions and they will avoid community outrage. This trust is likely to manifest itself in greater attendance at your community meetings and higher levels of involvement and resilience in your community.

Local government must meet residents where they are for effective policy and project implementation.

Shape a more inclusive community by learning how to utilize racial equity tools and cultural audits.