One of the biggest challenges facing governments throughout the world is financing infrastructure and other critical investments. This is particularly true in the U.S., where many important projects have languished since the Great Recession of 2008. 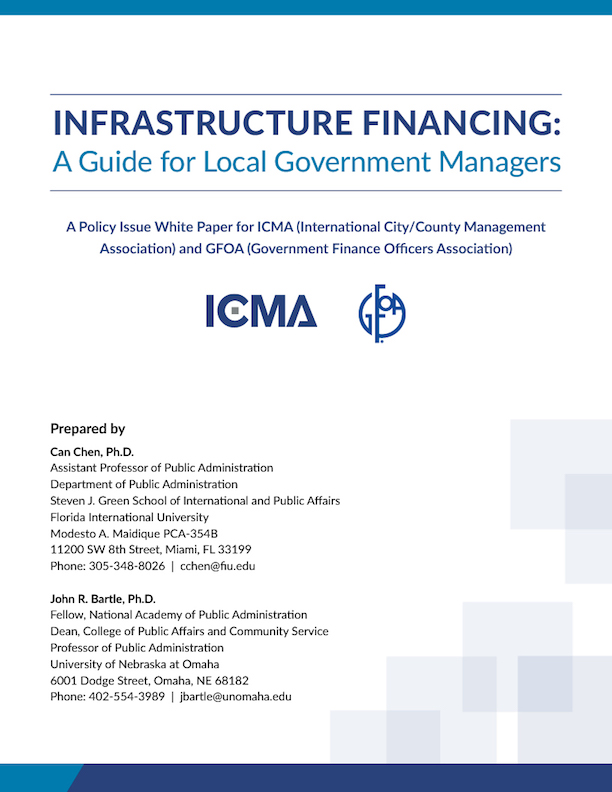 The Projected Outlook for U.S. Infrastructure

In ICMA policy white paper, “Public-Private Partnerships (P3s): What Local Government Managers Need to Know,” Dr. Lawrence Martin of the University of Central Florida, Orlando, cites the American Society of Civil Engineers (ASCE), which rates the current overall GPA of U.S. infrastructure as a D+.  The ASCE estimates that it would cost $4 trillion or more to bring U.S. systems up to the minimally acceptable standards. The Environmental Protection Agency estimates that an annual payment of $170 billion is needed to improve U.S. bridges, roads, and transit, and that an additional $400 billion is needed over the next two decades to maintain the U.S. drinking water infrastructure.

The bottom line is that U.S. cities and regions are now primarily on their own, and that states and the federal government will make smaller and smaller contributions to local and regional government budgets. “State and Local Fiscal Facts: 2017” reports that while the fiscal conditions of state and local governments have stabilized since the 2008 recession, improvements have been uneven.  During 2016, states saw moderate improvement in their fiscal condition, with general fund spending on track to grow at a modest pace during 2017 for the seventh consecutive year based on states’ budgets. Despite these improvements, 32 states spent less in FY2016 than the pre-recession peak in 2008.

At the same time, local governments are demonstrating leadership to increase infrastructure investments. Professionally managed U.S. local governments of all sizes are particularly well-equipped to assess their deficiencies and then put into place and maintain the kind of P3s that can address those challenges.

In light of their track record of efficient, cost-effective operations, professionally managed communities are more likely to succeed in developing and implementing P3 projects. The IBM Global Business Services report, “Smarter, Faster, Cheaper” found that cities that operate under the council-manager form with a professional manager are nearly 10 percent more efficient than those that operate under the mayor-council form. The Equipt to Innovate initiative created by Governing magazine and Living Cities found that top-performing cities in all but one of seven key elements employ a professional manager and operate under council-manager government.  Likewise, two-thirds of Moody’s Aaa-bond-rated cities benefit from having professional local government managers at the helm. 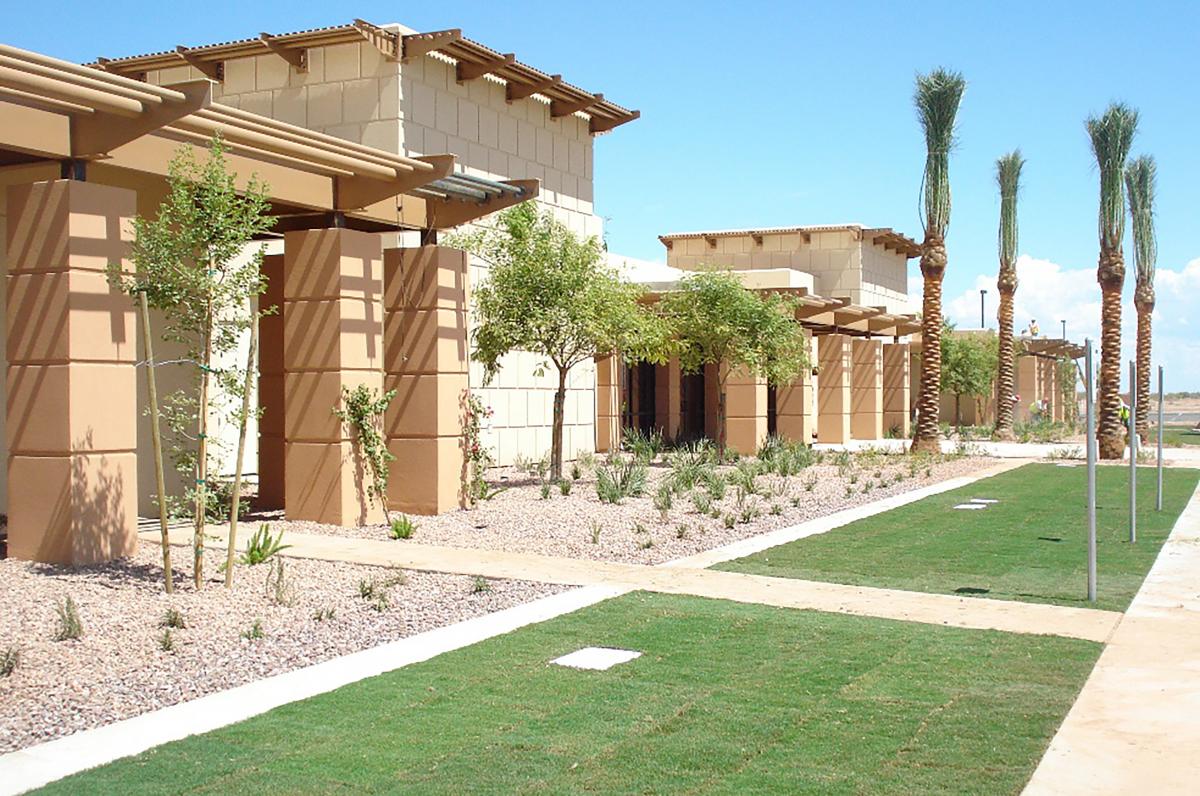 The Casa Grande Performance Institute, a public-private partnership between the city of Casa Grande, Arizona (pop. 51,478), and the Francisco Grande Resort & Hotel, was completed in just 119 days. The accelerated schedule was required to complete the project in time for the start of the inaugural season of the United Football League (UFL), when two of the UFL teams used the facility as their training and practice home. Four Major League Soccer teams have also trained at the CGPI, with more teams expected.

The importance of the project and the compressed construction schedule demanded the involvement of an executive-level decision maker, and Deputy City Manager Larry Rains stepped in to guide the design, development, and implementation of the project by overseeing construction details that would normally be reserved for a project foreman or on-site developer. Without Rains’ direct involvement and supervision, the CGPI could have faced delays that would have had catastrophic effects on the city’s relationship with the UFL and threatened the success of the project. 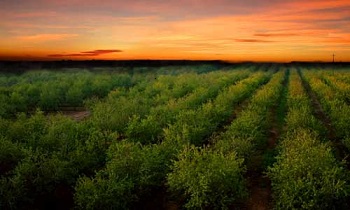 To reduce capital its budget costs, in 2001, Merced County, California (pop. 266,353) partnered with Siemens Industry, Inc., on a county-wide lighting and major mechanical energy performance project. Through the improvements, the county achieved 120 percent of its guaranteed energy savings.

Following the success of this initial partnership, in 2007, the county partnered with Siemens for a second energy performance project, which included a significant solar component. Economic conditions postponed the solar project until 2010, when county officials decided to use funds that had been reserved for capital projects to build a solar array at their Sandy Mush correctional facility. Merced County selected Siemens as the primary contractor to implement the solar energy project. County officials “hit the switch” and the system began delivering power to the facility in December 2011.

Siemens estimated that the solar array system helped save Merced County approximately $312,000 in energy expenses in the first year, with total estimated savings of $14 million over the next 25 years. Through this solar energy project, Merced County will become eligible for up to $1.5 million in utility rebates.

One outstanding example of how smaller, professionally managed communities can join forces with other small jurisdictions and the private sector to support growth can be found in Southern Idaho where the region struggled to attract and retain business. Funds for economic development were limited, and there was little knowledge about how to market the region and coordinate various communities’ efforts.

In 2001, the cities of Twin Falls and Jerome offered funding to help launch a regional public-private venture, the Southern Idaho Economic Development Organization (SEIDO). Since then, eight other cities in the region have joined the partnership. SIEDO participants also include local, regional, and state governments; community economic development leaders; business support organizations; chambers of commerce; the College of Southern Idaho; and Business Plus, a nonprofit organization of private businesses that support regional growth.

Fifteen years later, Southern Idaho’s “Magic Valley” has attracted capital investments exceeding $1 billion from more than 35 new and existing businesses and has created more than 5,000 direct and indirect jobs. Major companies such as Chobani Yogurt, Clif Bars, Mulhollland Manufacturing, DOT Foods, and others have moved into the area.  In 2015, the U.S. Department of Commerce recognized Southern Idaho as one of 12 Federal Manufacturing Communities in the country, opening new sources of federal funding and giving the region’s efforts national prominence.

P3s are nontraditional approaches that require new thinking, according to ICMA’s “Public-Private Partnerships (P3s),” and they can present local governments with unique challenges that need to be carefully managed. While all local governments can use these creative approaches to decrease operating costs, increase efficiency and productivity, and improve the overall economic health of the community; professionally managed communities are particularly adept at utilizing these financing options.

This is a slightly edited version of an article that originally appeared in the January 2018, issue of Business View Magazine.

20 local government experts offer their perspective on issues that will shape communities in 2020 and beyond.

Five Steps to Get Started in Retail Recruitment

Help your community become “retail ready” and set a plan in motion for attracting new businesses.

A New Framework for Budgeting: Involving Customer Service, Innovation, and Employee Engagement in the Process

A paradigm shift in the way budgets are usually prepared [PM Magazine, February 2020]