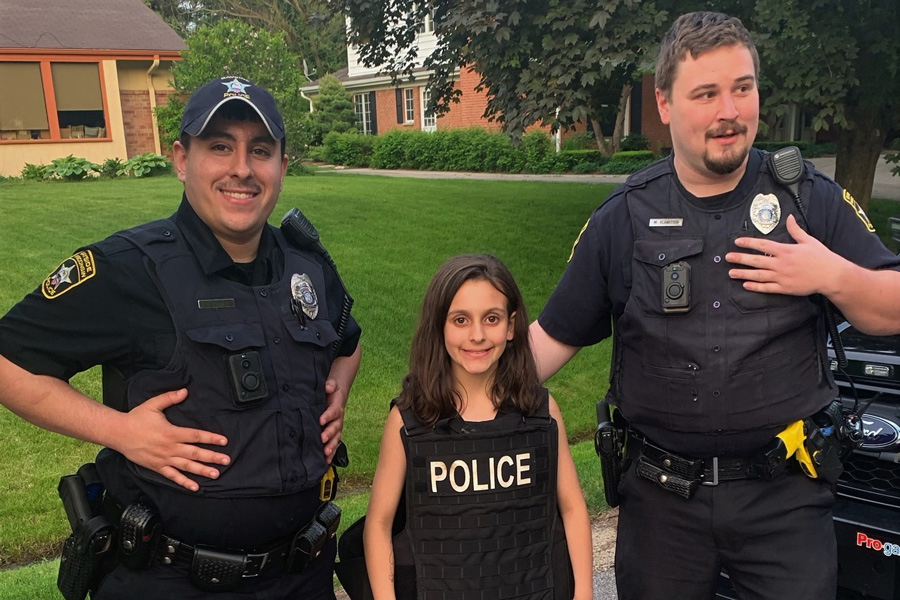 Bayside rose to the challenge of maintaining and enhancing police/community relations in spite of the real and perceived issues facing the relationship. While Bayside residents appreciate and value their police department, the composition of the department changed by more than 50 percent in an 18-month period due to retirements. At the same time, the composition of the community also changed as empty nesters sold their homes and new families moved in.

To address this fundamental challenge, the village developed a program called myBlue, Building the Bond…One Street at a Time. Founded on the principles of community-oriented policing, the program involves the tailored delivery of non-urgent advice, resources, and individualized police services to eight Bayside neighborhoods by enhancing community relationships with police, identifying problems, and collaboratively developing solutions.

The village is divided into eight geographical sectors with an officer designated as a liaison or “sector chief” for each. The sector chief introduces himself or herself to residents in the sector with a goal of contacting 30 percent of the sector each month until 90 percent of residents have met their sector officer one on one.

Andy Pederson, Bayside village manager, said, “We are a close-knit community and this program will further humanize the services we provide, allowing residents to feel even more comfortable connecting with their assigned police liaison.”

The philosophy is to replicate the role of the “cop on the beat,” who walked a small area and learned the nuances of the neighborhood. It’s no secret that residents are more likely to report crimes, suspicious activity, and generally interact with the police if they feel they have a personal connection with the police department. At the same time, the police sector chiefs come to understand the needs of the sector based on data, history, and anecdotal information derived from the community.

Each myBlue sector chief conducts monthly “mobile meetings” designed to generate two-way dialogue and create a network of neighbors to enhance community communication and share resources as well as concerns. Each sector also has one sector-wide event or multiple smaller events annually with a goal of reaching 70 percent of sector residents.

Sector liaisons bring a personal touch and increase the trust that Bayside residents have in their public safety providers. Service is enhanced, residents feel connected, and everyone benefits. 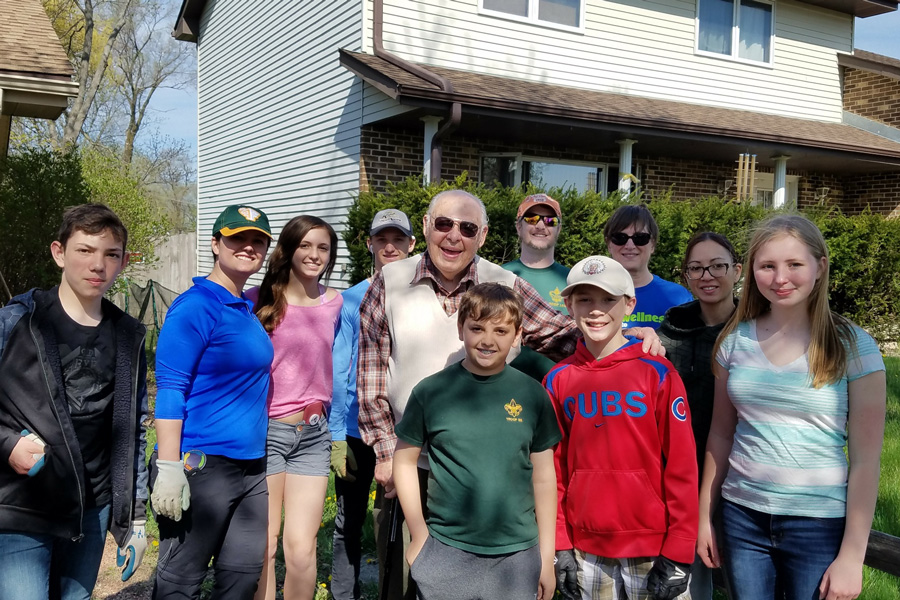 In the fall of 2017, a Lindenhurst police officer was patrolling a neighborhood and noticed an elderly woman moving a ladder around the exterior of her home. The officer watched as this senior climbed the ladder to clean the gutters. After stopping and talking to the homeowner, the officer discovered that the resident was 90 years old, lived alone, and had no family. The woman told the officer that she “didn’t want to be a bother to anyone.” While the officer appreciated the resident’s independence and initiative, she felt concern for this woman’s safety.

It was through this experience that the officer recognized an often silent, but growing, need in the senior community of Lindenhurst. Immediately, she and her patrol partner approached the chief of police and village administrator with the idea for a community engagement program, which became known as Elderly Resident in Need, or E.R.I.N.

The E.R.I.N. program provides assistance to the village’s senior population. It is not intended to replace other social services, but instead stresses a personal touch for senior residents by giving them and their family members much-needed peace of mind. The E.R.I.N. program connects Lindenhurst volunteers with elderly residents in need that are identified through first responders, medical contacts, family, or neighbor recommendations.

Officers developed criteria for the program, created brochures, and launched a social media initiative. The initial response to a call for volunteers was overwhelming, and the program officially debuted in November 2017. Volunteers help the senior residents of Lindenhurst by assisting them with small home projects, yardwork, snow shoveling, window washing, gutter cleaning, and other household upkeep.

It became clear that the program needed to include more individualized attention in addition to the completion of household maintenance tasks. So the program added scheduled phone calls and home visits. These “well-being checks” allow officers a friendly, caring way to touch base and ensure that the resident is doing well.

More than 40 volunteers serve more than 15 elderly residents, and approximately 35 projects were completed in 2018, not including the daily visits and phone calls.

The program has no designated funding, and the village relies heavily on volunteers to creatively seek resources, equipment, and tools to successfully complete the projects. The program can be easily duplicated, and other municipalities have sought information on how to implement something similar in their own communities.

This groundbreaking program originated from a public safety officer recognizing a need and then identifying a resourceful means of effectively addressing it. Communications from elderly residents and their relatives have confirmed the value of the program. Through the initiative of these officers and the generosity of volunteers, Lindenhurst has seen the lives of many of its most vulnerable seniors improved, and the lives of its volunteers more fulfilled. 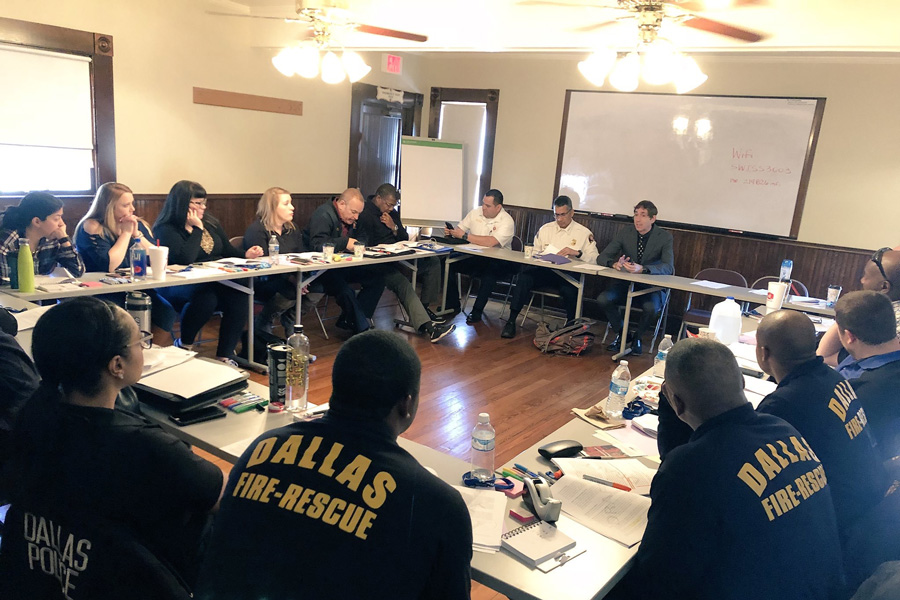 Between 2012 and 2015, the number of 911 mental health calls requiring an ambulance response in Dallas, Texas, increased by 59 percent (from 2,176 to 3,452). The bulk of the increase was experienced in the South Central Dallas Patrol District. Due to the limited care options available to law enforcement officers, the individuals were increasingly arrested and detained at the county jail or admitted to local hospital emergency rooms.

During the same time period, the South Central Patrol District experienced a 66-percent increase in 911 calls that resulted in an emergency detention (apprehension by a peace officer without a warrant) and transported to an emergency room or mental health treatment facility.

These mental health emergency calls have placed increasing demands on police and emergency medical services. A combined 9,000 hours per year are spent responding to and transporting residents facing an emergency mental health crisis, and in 2013, Dallas County spent more than $47 million on housing, processing, and treatment for people living with mental illness.

In January 2018, the city of Dallas, the Meadows Mental Health Policy Institute, and Parkland Health and Hospital System launched an innovative, data-driven, and multidisciplinary program called the Rapid Integrated Group Healthcare Team, commonly known as RIGHT Care. The program was launched in the South Central Patrol District to specifically address this complex and costly response to mental health–related 911 calls. The RIGHT Care program brings together a law enforcement officer, a paramedic, and a licensed mental health clinician into a cohesive unit that responds as a team to mental health–related calls.

The RIGHT Care program has delivered positive results. The Dallas Police Department experienced a 19-percent reduction in mental health calls to 911 requiring an ambulance response, and the response time to clear the scene of a call has decreased dramatically. Because the RIGHT Care program is made up of team members from multiple disciplines, the efficiency of the program returned 42 full weeks, or the equivalent of one full-time employee, back to the police department over its first eight months.

The number of arrests, rearrests, and apprehensions of people experiencing a mental health crisis has also declined, and Parkland Health and Hospital System has seen a reduction in the rate of people who return to the emergency department.

Through this innovative and evidence-based multidisciplinary team approach, Dallas has reshaped a small part of the healthcare system that deals with patients who have urgent mental health needs. Each stakeholder in the RIGHT Care program is now better equipped to provide optimal care to those in crisis.