Your leadership philosophy determines your organizational management system, which sets the tone for your approach to teamwork.

When this series began in the June 2021 issue, we said high performance is not something you do, but rather a habit for continuous improvement achieved by doing the work of leadership to create organizational culture. The July article focused on beliefs about people and work, developing and enacting a leadership philosophy.

In this installment, we examine how leadership philosophy determines the way organizations operate and influence their potential for higher performance.

Philosophical Differences: How and Why They Matter

For more than 20 years, Rensis Likert, a social scientist at the University of Michigan, studied organizations and how they performed. Using the scale named for him, Likert surveyed employees, managers, and executives of organizations, asking them to select a descriptive response along a continuum to a variable question, such as in Figure 1.

Based on that work, Likert concluded that every organization could be placed in one of four different leadership/management systems, as illustrated in Figure 2. 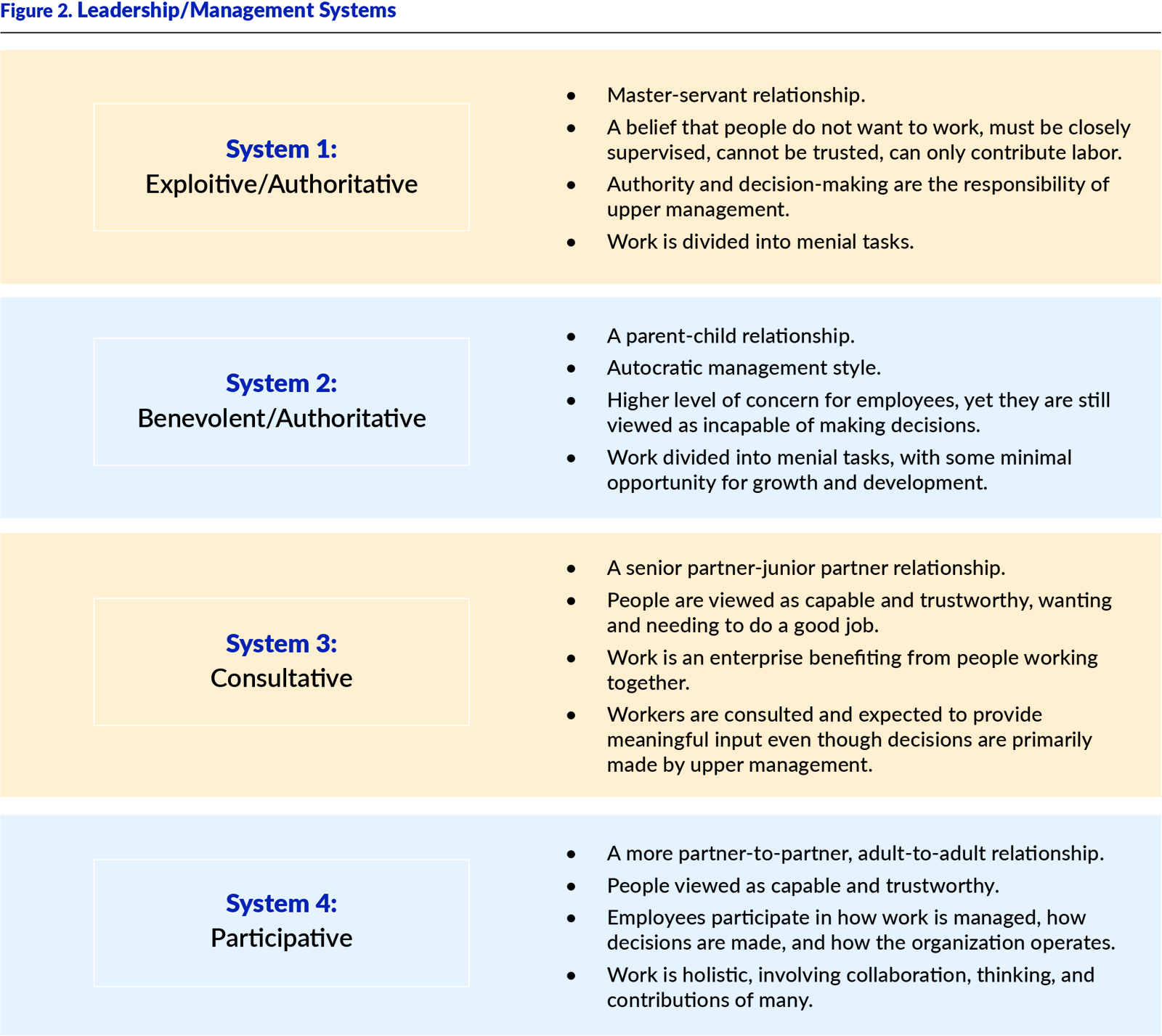 Likert said the real purpose of his work was “to discover the organizational structure and the principles and methods of leadership and management which result in the best performance.”1 Likert’s studies demonstrated beyond question that higher levels of performance are achieved not through the autocratic systems (Systems 1 and 2), but through employing the consultative and participative approaches (Systems 3 and 4).

Examining Our Thinking and Leadership Philosophy

The culture we believe is best in our organizations is consultative and/or participative and those are the very organizational systems that provide the best performance.

“Silos are supported by our past experiences and provincial attitudes,” says Hannes Zacharias, KU’s professor of practice and former manager of Johnson County, Kansas. “The cultural change creates a trusting environment where people feel part of a collective effort to help an organization out of its silos.”

Systems 1 and 2 rely upon individuals working independently, responsible not only for their own work but dependent upon others for final production—the “me” paradigm. In Systems 3 and 4, people share responsibilities and work collaboratively in a multi-dimensional network manner. They are interdependent. This is the “we” paradigm.

This difference between “me” and “we” manifests itself significantly in the way people work together and contribute to the whole, what is often called synergy—the whole is greater than the sum of its parts.2 Synergy does not come from structure, rules, or management. It comes from an atmosphere of productive, safe, and inclusive relationships. Building relationships is the human side of work. It requires both intention and attention.

A consultative/participative organization uses the “we” factor to maximize the abilities of the whole. Doing so requires more than people just getting along. It requires an intentional willingness of everyone in the organization to partner seamlessly to accomplish not just assigned responsibilities, but also whatever else should be done. This “team sense”—a “teamness” attitude—has four fundamental beliefs:

1. Each of us is responsible for the success of each other, the group, and the organization.

3. Success of the organization is success for each of us.

4. Each member is a partner, not a customer or competitor.

Most organizations have teams, but teams and teamwork are not synonymous. Teamwork is cultural, not structural. It is behavioral, not procedural. It starts with the attitude of “teamness,” that we contribute to each other for the benefit of the whole. For individuals, it is an affirmative choice, requiring active, engaged participation; open and candid communication; attentive listening; curious inquiry; concern and caring for the needs and inclusion of others; and unconditionally supporting the efforts of others.

Cheryl Hilvert, who is now ICMA’s Midwest regional director, worked with her team to create a culture of high performance when she served as city manager of Montgomery, Ohio. “High performance culture emphasizes the value of people, their contributions, and how much more you can achieve by working together.”

For organizations, building teamwork requires a strong leadership commitment to establishing and maintaining an environment in which shared responsibility and effort are expected and recognized, individual performance is important but not in competition, diversity and inclusion are valued and actively sought, speaking up is encouraged and accepted, trust is extended and fostered, and people want to belong. True teamwork does not just happen. Rather, it flourishes where conditions are ideally suited,3 where we understand and trust each other in a psychologically safe environment.

The Worth of Trust

For true teamwork, trust is essential. In his book, The Five Dysfunctions of a Team, Patrick Lencioni distinguishes between vulnerability trust (the confidence that the intentions of team members are good and that there is no reason to be self-protective in the team) and reliability trust (the confidence that another will act consistent with past behavior or practice). High-performance teams require that members be trustworthy and reliable in their interactions. But the performance depends greatly on members willingness to be vulnerable to one another and having the confidence that their vulnerabilities will not be used against them.

Vulnerability here means showing our human side, that we are fallible, need and ask for help, do not have all the answers, and are willing to admit deficiencies and accept responsibility for errors or shortcomings.

We are all responsible for our own trustworthiness. Are we reliable? Are we willing to be vulnerable? Those are choices. Believing in and extending trust to others rather than requiring it to be earned is also a choice. We can choose to believe that people are trustworthy, that extending trust is the better way to provide leadership. We can assume positive intent with what others do and say. We can extend to them the benefit of the doubt in misunderstandings. We can provide them confidence and comfort that their vulnerabilities will not be used against them. When we do, we build a trusting work environment.

High-performance teams are centered on maximizing the collective talents and capabilities of everyone in the organization to accomplish whatever should be done. However, participation, speaking up, asking questions, providing discretionary thinking or effort, are provided only within an environment understood to be psychologically safe. If we “feel” that we will be rejected, ostracized, embarrassed, suffer retribution or blame, we are unlikely to openly speak or participate. Our fear of the personal risk will overcome any sense of teamness.

In her book, The Fearless Organization, Amy Edmondson describes a psychologically safe climate as a place where members feel comfortable expressing and being themselves, sharing concerns and mistakes as well as contributing ideas and information, without fear of interpersonal risk. Accountability and consequences are handled in an adult-to-adult manner, not in a personal or punitive manner. Psychological safety is found when each member holds the following beliefs:

• I belong and am accepted for who I am, my whole identity.

• I am seen—whether present or not, I am safe in the group.

• I am heard—I am safe in speaking up, speaking out, and speaking truth.

• I am valued—I am safe in my contributions and my mistakes.

Establishing and maintaining that atmosphere is part of the hard work of leadership.

You may be familiar with this parable about teamwork:

Creating a culture of higher performance requires that we operate within a consultative or participative organization. For us, Everybody must participate.

Next month in Part 4, we will explore the meaning and principles of leadership in a higher-performance organization. 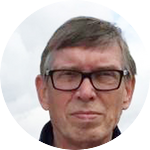 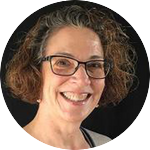 2 Often attributed to Aristotle, but the exact origin is uncertain.

3 There are many outstanding resources for teamwork. Our recommendation: J. Katzenbach and D. Smith, The Wisdom of Teams (1993).

How to Overcome Resistance to New Technology in Local Government

Prioritizing day-to-day work over implementing improvements is a hard habit to break.