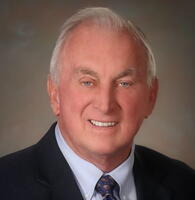 James "Jim" Crosby is city manager in Yukon, Oklahoma. He has served local governments in the state throughout his 55-year career. He served Yukon as city manager from 1994-2011, then served in Piedmont for more than four years before returning to Yukon. He served Oklahoma City as general services director (1991−1994); executive vice president for the city’s chamber of commerce (1987−1991; and recreation superintendent (1964−1973). In Norman, he was city manager (1976−1987) and director of parks and recreation (1973−1975).

ICMA had the chance to connect with Jim as he reflected on his career.

ICMA: What was your first job?

JC: My first job was as the Community Center Director for Oklahoma City, Oklahoma.

ICMA: What was the most unusual council or other meeting you attended?

JC: One of the most memorable meetings was a meeting to reaffirm a section of an ordinance of discrimination. It went into the early hours of the morning and failed 4-3.  The ordinance was still in place and did not change a thing.

ICMA: What is the most random item in your office or on your desk?

JC: It’s a desk sign that was handmade by my son.  I have proudly displayed it on my desk for the past five years.

ICMA: What mistakes have you made that have taught you lessons?

JC: Not reviewing an item a department head sent to the city council.

"Mr. Crosby, or “Jim” as he asks us to call him, has demonstrated incredible leadership in our community, making contributions to local government beyond the city limits of Yukon."

Join us congratulating Jim on 55 years in the profession!